Today is a non-law post.  I wrote this for Anzac Day 2016 and I think it bears re-sharing today.

Tomorrow is Anzac Day.  For the benefit of non-Australian readers, Anzac Day commemorates 25 April 1915, when Australian, New Zealander, French and British troops landed on the Gallipoli peninsula during the First World War.  It’s also the principal day for commemorating Australia’s veterans of all conflicts.

Meet Jimmy.  Or more properly, Lance-Sergeant James Martin Voss, 3rd Battalion, Australian infantry.  The War Memorial’s roll of honour states that he died of wounds on 17 October 1916, aged 21 years.  He was a farmer by profession, from Burrumbuttock in New South Wales.  And he was my grandmother’s brother.  She told me once that she remembered exactly where she was when she last saw him – under a tree not far from the family’s farm – and I remember that she called him “Jimmy”, the nickname he must have had as a boy.

He enlisted on 26 August 1914, 22 days after Australia entered the war.  His service record says that he died in Belgium – probably at Ypres – of a gunshot wound to the head.  Reading between the lines, I suspect that the wound was self-inflicted.  Who could blame him if he decided to choose the time and manner of his death?  Not every wound on a soldier is physical. 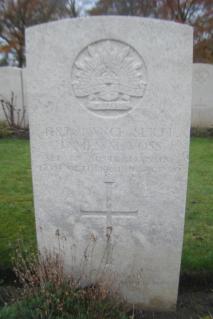 There’s a good argument that the Great War made possible such peace and security as exists in the world today.  But ‘big ideas’ like this seem empty in the face of the pain and wasted life of a young man.  The only thing that can ease human pain is human joy and human hope.  I’d like to hope that before he left this world, Jimmy had the chance to know some of the poilus – the farmers and countrymen like himself who were the backbone of the French infantry – and that he found in them kindred spirits. 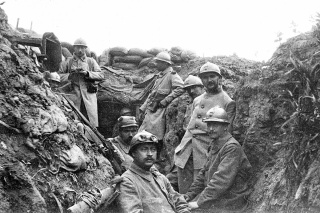 I’d like to think that Jimmy would have been comforted to know that his sister became a nurse and a midwife, and preserved and birthed life in a world he had seen blasted by death.  I don’t think that his sister ever stopped missing him, from their farewell in 1914 until her own death 80 years later.  Perhaps it would have been a comfort to her to have seen the care lavished on the Lijssenthoek Military Cemetery by the Belgian people.  And perhaps it would have been comforting to both of them to know how beautiful Ypres would become once the guns fell silent and life returned.